A few days after the club decided to downgrade the Harefield Academy, the jewel in Watford’s not hitherto illustrious crown, to the third category of the Elite Player Performance Plan, guest writer Nick Chainey (@NLFG) wonders what the implications of such a decision could be…

Much has been made in the last few days of Watford’s decision to pull out of our attempt to be graded as a Category 1 academy, and instead assume the mantle of a Category 3 club, joining illustrious company including our friends up the M1, MK Dons & Aldershot.

Like many supporters, I took the decision initially as a complete betrayal of the club and its traditional values as a club which gives youth a chance, in favour of a short term cash saving – that for all the Pozzo’s good words about respecting the club’s traditions, they intend to use us as a farm for their bloated squads.

That said, with the Pozzo’s stated aims of trying to make the club profitable, the rules that govern the new academy system arguably made the Category 1 application unsustainable. For a club of Watford’s size to be prepared to commit over £2,000,000 a year to the academy given the current levels of revenue is impossible. Without knowing the figures, even the £1,000,000 mandated by Category 2 may be beyond the club’s reach. Much has been made of this financial aspect, and one thing to be borne in mind is that although Category 3 suggests a spend of around £300,000 a year, that is a minimum – not a maximum. As others have pointed out, the Pozzos have begun investing in both Grenada and Udinese’s youth systems, and they may feel that the already deep-rooted Harefield academy does not need quite the investment that the top two categories insist on. There is, of course, a certain level of gamble involved in this decision – no doubt Nani and Duxbury are hoping that, given the lower levels of compensation available to Category 3 clubs, any players currently in the academy will want to stick around with the incentive of a well trodden route to the first team that isn’t available at bigger clubs. 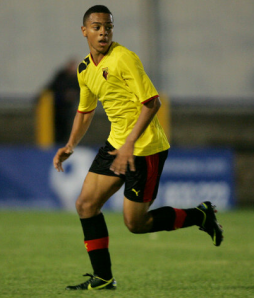 Jazzi Barnum-Bobb, one of the scholars worried about the standard of future opposition.

Beyond the financial arguments, a deeper look suggests that in many ways, Category 3 will make no real difference in the long term to Harefield, and may in fact be a very shrewd move by the club.

Nick Cox’s interview on the club website betrayed some of the thinking behind the move. Whilst the club will still need to work within the constraints and structure of EPPP, the fact that the club will still be able to recruit nine year olds & sign kids as a pro at seventeen means that the allure of the long term partnership with the Harefield school can continue to be used as a selling point.

Furthermore, whilst some have lamented that the kids within the youth system will now be forced to play games against inferior opposition, Cox has made clear that he feels that first team football against adults, which those deemed ready will gain out on loan, is far more beneficial to youngsters than playing against each other.

The key, of course, to a successful youth system is the appearance of players in the parent club first team, and, as has been widely advertised, the club has reached the impressive milestone of fifty lads stepping into our first XI. What hasn’t really been dealt with in detail is actually how good those youngsters have been. With a critical eye, there has been more Jamie Hands than there have been Ashley Youngs. Of course, this is an accusation that will perhaps more be levelled at the old academy rather than Harefield, whose first proper batch of players contained the likes of Hodson, Thompson & Bennett – all players of clear potential who have been on the first team scene for the last three years. In order for the academy to succeed – at any category – players must have a route to the first team. So whilst the majority of Zola & Nani’s acquisitions have been loanees from the other Pozzo group clubs it has been somewhat comforting that Zola has spent preseason giving some of the youngsters a run out and with the return of the 7 sub bench, it is to be hoped that they’ll continue to be given the chance to impress.

What would have been rather more comforting, as a supporter, would have been if the announcement of the withdrawal had been couched as a criticism of the new system which has been designed to entrench the top clubs as the destination of the best talent at the expense of the likes of Watford. Wycombe’s complete withdrawal from youth development was announced as being caused by the new combination of expected costs versus rewards for small teams and for a club the size of Watford – one with the reputation for development that we hold – to have come out against it would’ve made a huge statement.

Of course, the flexibility that is available to the club is a two-way street. My point of view is an optimistic one – as the Watford Observer has pointed out, by being a Category 3 academy a number of staffing positions within the academy could become redundant as there is no mandated need for them and Nani’s use of the dreaded term “sensible investment parameters” suggests that there may be a review of the level of investment currently made in to the academy.
With the new category in place for the next three years, decisions about Harefield being made now will not necessarily be felt immediately at first team level, but it is to be hoped that Nick Cox will be able to continue to work as he has in the past in order to continue the increasingly high quality production line into the first team which has been put in place. The wildcard in all this is the club’s ambition to reach the Premier League. Should the “promised land” be reached and the club remain there on a long term basis, it would be hoped that the club would once more apply for the Category 1 status that many feel is owed to the club to reflect the Harefield Academy’s pioneering role in youth development in this country.