The next player that we welcome to Vicarage Road is something of a novelty – a loanee from the capofamiglia that I’ve actually heard of! The winger Ikechi Anya has experience of playing in England, and will be hoping to prove his worth upon his return to this gilded isle. 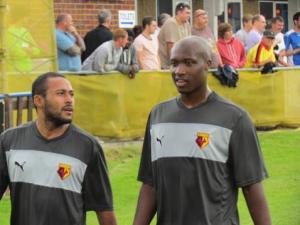 For Anya’s career has been one of huge highs and pretty severe lows. Like Steve Leo Beleck, he made his club debut at the age of 16 for Wycombe Wanderers – at the time their youngest ever player. Wikipedia shows him to have quite the familial background: his father a Nigerian research scientist, his mother a Romanian economist, he was born in Glasgow, along with his brother, who is a full-time doctor and a part-time hip-hop artist (for a sample of his stuff, look no further than this link). With such an educated and cosmopolitan family, it is perhaps unsurprising that he was able to adapt so well to football abroad, something that many of his fellow Brits have failed to do.

But that’s getting ahead of ourselves. After a prodigious start at Wycombe in 2004, for which he won the Apprentice of the Year award at the first ever Football League Awards, his star started to wane. Having made only 18 appearances in three seasons following his emergence, due in part to tendonitis of the knee, he was released and spent the next season first at Oxford City in the British Gas Business League Division One and then at Halesowen in the Southern League Premier, where he did battle with the likes of Hemel Hempstead and Cheshunt. It must have felt like Anya was just another one of those familiar stories: the player who bursts onto the scene, but fails to maintain their early form and promise and fades into obscurity. Unlike the Jamie Hands, Gary Fiskens and Jason Norvilles of this world, however, Anya fought on – whilst working part time as a PE teacher.

In the summer of 2008 he joined the Glenn Hoddle Academy, based at the time in Jerez in South-West Spain (very close, incidentally, to Granada’s own feeder team Cadiz), where the ex-England manager aims to continue the development of young players considered not good enough at 18. By Anya’s admission, it took working with this group to complete his mental development as well as physical and after a year at the academy (the ‘highlights’ of which are in this video), he was offered a short term contract with Northampton where he made 14 appearances, scoring three goals. Then-Northampton manager Stuart Gray wanted to extend his deal after this solid return to league football, but a more fairytale-like future was in store. Through the links in Spain provided by the Glenn Hoddle Academy, Anya had caught the eye of Sevilla, and in the summer of 2009 signed a two year contract with their reserve side, Sevilla Atletico, playing in the Segunda Division B. 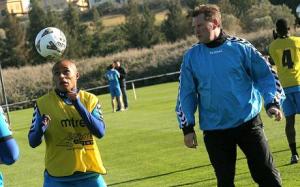 Though this is probably a lower level than the one at which Watford operates, the difference between playing sides like Gifton Noel-William’s Real Murcia and Hemel Hempstead is huge, and to be tied to a team like Sevilla, Copa del Rey winners in his season at the club, must have been a dream come true to a still-young footballer recently consigned to the scrapheap. At the end of that season, after playing 22 games for Sevilla B, he moved again, to Celta Vigo B in the same division. 35 games and 8 goals later, the winger was called up to the first team, where he made a solitary substitute appearance the Segunda, against Granada.

Just a few months after that game, Granada were promoted to La Liga, and, having clearly impressed in those 6 minutes, Anya was signed to a three year contract. He has not played for them as of yet, spending last season on loan at Cadiz, just down the road from the town where his dream reignited, where he scored 5 goals in 38 games.

Now 24, Anya is no longer a young player, and will be hoping to show English football what it’s been missing. A swift winger of slight build, only 5ft 6in, he could be the perfect complement on the wing to Sean Murray, and Watford fans will be hoping that he can have the same impact as that of Alex Kacaniklic – providing balance to the Watford attack and taking some attention off Murray. Anya’s career path is extremely odd, and the fight he has shown is to be applauded, but this year is his biggest challenge at the highest level that he has encountered so far. Hopefully he will provide the injection of pace that our side needs, and will continue his remarkable ascent.

N.B. My optimism is nothing to do with how well he performed for my St. Albans team in some Football Manager of yesteryear, I promise.